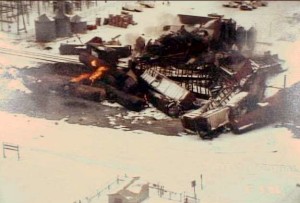 Today marks the 20th anniversary of the Weyauwega train derailment. On March 4th,1996, just before 6 a.m., a fractured bolt in a rail on the city’s north side caused 37 cars of an 81-car Wisconsin Central train traveling from Stevens Point to Neenah to derail.

Those cars contained propane, liquefied petroleum gas, and sodium hydroxide. Three of them ruptured, causing a huge fire that could be seen for several miles.

Waupaca County Emergency Management Director Andy Carlin was working for an Appleton ambulance service at the time, and was a member of the Hazmat team that responded to the scene. “I remember leaving Appleton, and seeing the big mushroom cloud over by Weyauwega. That was impressive – and scary,” Carlin said.

Somehow, there were no fatalities from the derailment and subsequent fire. Carlin said those on the scene all know how lucky they were. “There was one tank car there, that nobody knows why it didn’t blow up. All it would have taken was for one car to blow up and they’d have all went.”

As it was, some 1700 residents of the city of Weyauwega, and 600 others from the surrounding area were evacuated for nearly 3 weeks. Carlin said that in the 20 years since the accident, emergency personnel have become more aware of just what types of materials are being carried by rail, and how to deal with them if there is an accident.

The final cost of the derailment and a class action suit was around $28 million.