You are here: Home / Packers / Report: Starks re-signs with Packers 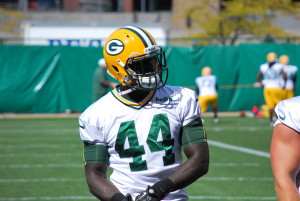 According to ESPN’s Adam Caplan, the Green Bay Packers and running back James Starks have agreed to terms on a two-year deal worth $6 million.

The 30-year-old Starks set a career high with 601 rushing yards last season, but he lost his starting job when fumbling became a problem.  He finished the season with five fumbles.

Starks has spent his entire career with the Packers and was their starting running back in Super Bowl XLV.