You are here: Home / News / Ryan focuses on poverty fight at CPAC 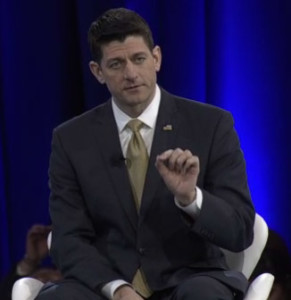 House Speaker Paul Ryan used a stop at a conservative gathering in the Washington area Thursday to talk about his hopes for changing the way the nation fights poverty.

Conservative Political Action Conference, the Janesville Republican argued a new approach is needed because, despite decades of effort and trillions of dollars spent, the war on poverty is at a stalemate. “We think by applying our principles we can see better results and actually get at the root causes of poverty,” Ryan said during an on-stage interview.

Ryan said doing that requires changing programs he believes are trapping people in situations where they can’t afford to work because they risk losing benefits. “We’re trapping people in poverty, by basically paying people not to work,” Ryan said. “So we need to make it so that work always pays. And what we’re doing with these programs is we’re isolating the poor. We’re pushing people outside of the workforce, and they’re missing out and we’re missing out on their talents.”

Ryan said he favors an approach that puts more resources in the hands of local groups and lowers tax rates. “Government can be a part of the answer by helping people be the solution, getting government out of the way. And government can provide resources in many ways, but let’s customize welfare benefits so that they can meet people with their needs and encourage things like work.”