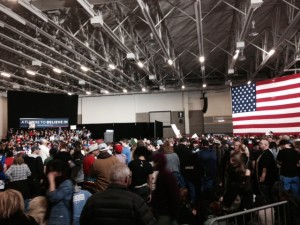 Democratic presidential candidate Bernie Sanders referred to Wisconsin’s Republican governor more than his opponent for the party’s presidential nomination, during hour long remarks Saturday in Wisconsin. At a rally in the Exhibition Hall of Madison’s Alliant Energy Center, the Vermont Senator said that he and Hillary Clinton both agree that a Republican can’t be allowed to win the White House in November — the only time he mentioned Clinton by name.

But Sanders launched into a extended riff on Governor Scott Walker. “Democracy means one person and one vote and whether Governor Scott Walker likes it or not that is exactly what we are going to bring to every state in this country, including Wisconsin,” Sanders said, in an apparent reference to the state’s new voter ID law. “And I say to Governor Walker and all of the other cowardly Republican governors if you can not win or participate in a free and fair election where everybody votes, get out of politics and get a new job.”

Sanders celebrated caucus wins in Washington state and Alaska — and predicted that he’ll be his party’s nominee and the winner in November. “With your help we’re going to win right here in Wisconsin,” he said. “Don’t let anybody tell you we can’t win the nomination or win the general election. We’re going to do both of those things.”