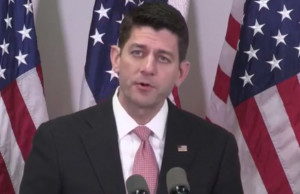 Trump has been under fire since this weekend, when he responded to a question in a CNN interview about whether he would disavow a call for support from David Duke by saying he didn’t know enough about the white supremacist’s positions to take any action. Trump has since said he has rejected support from the former KKK leader, also noting that he had disavowed Duke at a news conference two days before the CNN interview.

During a press conference in Washington Tuesday morning, the Speaker Ryan said he typically tries to avoid commenting on the day-to-day operations of the presidential campaign, but felt the need to speak up about an issue that runs counter to what the GOP stands for. “I want to be very clear about something: If a person wants to be the nominee of the Republican Party, there can be no evasion and no games. They must reject any group or cause that is built on bigotry,” Ryan said.

The Janesville Republican added “This party does not prey on people’s prejudices. We appeal to their highest ideals. This is the Party of Lincoln. We believe all people are created equal in the eyes of God and our government. This is fundamental, and if someone wants to be our nominee, they must understand this. I hope this is the last time I need to speak out on this race.”

Ryan did not mention Trump by name in his remarks. His comments come as voters in 11 states head to the polls for Super Tuesday, which could be a crucial string of primary contests for any Republicans hoping to mount a serious challenge to Trump’s candidacy.