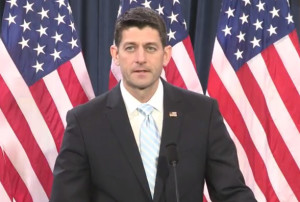 Ryan admitted he has been guilty of it himself, when he used to draw a line between “makers and takers” when referring to those on government assistance. Ryan said he stopped using that speech when he “realized that I was wrong. Takers was not the way to refer to a single mom stuck in a poverty trap.”

Ryan said there needs to be respect from both sides of the aisle, rather than insulting someone because their ideas differ. “If someone has a bad idea, why don’t we tell them why our idea is better? We don’t insult them in to agreeing with us. We try to persuade them, we test their assumptions and, while we’re at it, we test our assumptions too.”

Ryan’s speech comes as the Republican Party faces a hotly contested fight for the party’s presidential nomination, with the GOP facing a distinct possibility of a fight during its nominating convention later this summer. The Speaker did not mention any of the candidates by name in his remarks.