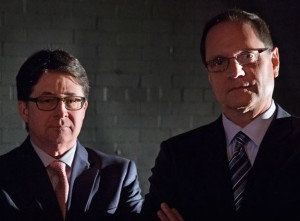 The two lawyers who represented Steven Avery during his murder trial plan to set off on a multi-city tour throughout the U.S. and Canada later this year, to discuss the case and the criminal justice system.

In a promotional video, Attorneys Dean Strang and Jerome Buting says they hope to continue the conversation started by the Netflix series about Avery’s trial, “Making a Murderer.”

Avery and his nephew were convicted for the 2006 murder of photographer Teresa Halbach. The Netflix series, released in December, has generated a heated debate about whether the two may have been framed for the killing, which took place as Avery was suing Manitowoc County for a previous wrongful rape conviction for which he spent almost 18 years in prison. He later settled the lawsuit while facing charges for Halbach’s death.

The schedule for the tour starts April 16, in Boston, and it ends on August 21, in Ft. Lauderdale, Florida. None of the stops are in Wisconsin.