You are here: Home / News / Ted Cruz campaigns in Rothschild 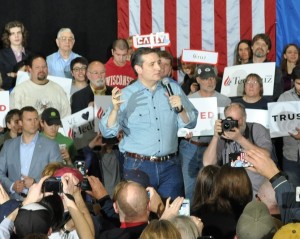 As Wisconsin becomes campaign central for presidential candidates ahead of the April 5 primaries, Republican hopeful Ted Cruz took his message to voters in Rothschild Monday night.

Cruz and rival candidate Donald Trump are both scheduled to hold events in the state Tuesday, and he laid the gauntlet for a renewal of their rivalry face-to-face. “I invite Donald, rather than do two separate town halls, let’s combine it and do a two-hour one-on-one debate. Now, in all likelihood, Donald is going to turn me down. Why? Because he’s scared of actually answering questions about substance,” said Cruz.

The Texas senator spoke highly of Governor Scott Walker, at one point in the presidential race himself. Cruz praised Walker’s victories against unions and in the recall of 2012. “What we need in Washington is more of that same courageous fight for principle that Scott Walker demonstrated here in Wisconsin, and it is that spirit, that fight is at the heart of what our campaign is all about.”

Cruz said his campaign speaks to Wisconsinites because of his dedication to restoring what he considers the foundation of America’s middle class. “Wisconsin has seen what this country has seen. The manufacturing jobs, the blue collar jobs that for decades formed the backbone of the American middle class, the kind of jobs that you could work and provide for your family with dignity and live an American middle class life, those jobs have been going away.”

Joining Cruz on stage was former Republican candidate Carly Fiorina.  The businesswoman confessed to the crowd that even when she was in the race, when it came time for her to vote in her home state of Virginia, she backed Ted Cruz.  State Senator for District 12 Tom Tiffany also spoke in support of the candidate.