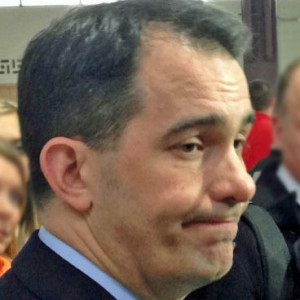 Wisconsin Governor Scott Walker says he’s getting asked to endorse presidential candidates. It’s not known whether one of those candidates is Donald Trump, who leads the Republican field among Wisconsin primary voters, according to the latest Marquette Law School Poll.

“Since last September I get called routinely, as you can imagine,” Walker said Wednesday in Appleton.

“A number of the candidates call on an almost weekly basis. Right now I’m just focused on being governor, and if I do any sort of endorsement it would probably be pretty close to the April presidential primary. I may not do one at all.”

Walker did not indicate which GOP candidates — Trump, U.S. Senators Marco Rubio of Florida and Ted Cruz of Texas, and Ohio Governor John Kasich — have been reaching out to him since he ended his own bid for the White House last year.

Walker did not mention Trump by name when he suspended his campaign back on September 21st, but hoped that his move would encourage others to bow out and allow a more conservative voice to challenge Trump and provide voters with a “positive conservative alternative to the current frontrunner.”

So far, Christie is the only one of Trump’s vanquished foes to have endorsed the real-estate developer and reality TV star.

Walker was as surprised as most other observers by Christie’s move. “Every time I think the campaign can’t get any more interesting, it gets more interesting,” he said in Green Bay on February 26th, reacting to the announcement from his fellow GOP governor. “The one thing I agree with my friend Chris on, is that as a Republican, it’s ultimately about making sure that there is a Republican elected president.”

Earlier that week, Walker called Trump’s continued dominance of the Republican field “one of the most remarkable things” he’s seen in modern politics.  Asked whether he would support Trump as the nominee, Walker noted that he made a pledge with other candidates last August. “I don’t know who the nominee is going to yet…but I don’t know that my position has changed in any way from then,” Walker said then.

At his Appleton appearance on Wednesday, the governor reiterated that his current attention is on Wisconsin. “Really I’m focused on being governor. The presidential candidates can more than handle themselves right now, so we’ll stay focused on that and see what the future holds.”

WHBY contributed to this report