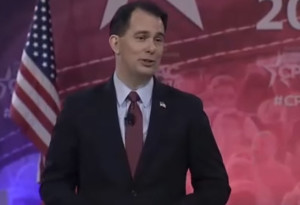 Governor Scott Walker urged a national conservative audience not to let concerns about the presidential race keep them from getting involved in state-level politics.

Speaking at the annual Conservative Political Action Conference in a Washington D.C. suburb Thursday morning, the governor said many Republicans may be confused or upset with the current direction of the party’s presidential race. Still, Walker asserted that “no matter what’s happening there, the conservative movement is alive and well in states all across America.”

Walker, who addressed CPAC last year as he was exploring his own presidential run, touted many of the gains Republicans have made in state politics in recent years – such as getting more GOP governors elected and winning back control of the U.S. Senate. He also touted work done in his own state, such as passing a Voter ID requirement, legislation defunding Planned Parenthood, and increasing employment numbers.

Walker ended his bid for the Republican nomination last September and, at the time, urged other candidates to work together so that a new frontrunner could replace Donald Trump in the race. That has not happened, and Walker hinted in his remarks Thursday that some conservatives are frustrated by the way things are currently going. Walker urged the audience not to give up in the months ahead. “We need your help in the states,” he said. “We’re depending on you at the state and at the local level.”