You are here: Home / Legislature / Wisconsin Senate set for final session day of the year 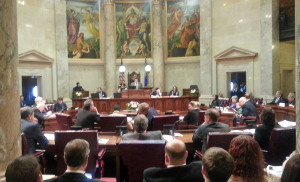 The state Senate will be back at the Capitol today for what’s expected to be the final floor period of the year for the chamber. Lawmakers have set an agenda that includes over 100 bills and about two dozen appointments.

The vast majority of the calendar is filled largely with legislation that easily passed the Assembly earlier this session and typically had strong support in committees. However, several proposals are expected to draw opposition from minority Democrats in the chamber, such as a bill preventing local officials from banning the use of plastic shopping bags, changes in foreclosure procedures for abandoned properties, and legislation targeting the permitting of high capacity wells.

There are also some notable omissions from today’s calendar – including bills that were part of Governor Scott Walker’s college affordability agenda, legislation prohibiting the creation of so-called “sanctuary cities,” and several pieces of a larger package from the Assembly that target Alzheimer’s and dementia care services.

Assembly Democratic leader Jennifer Shilling (D-La Crosse) slammed Republicans for offering up what she described as a “disappointing” agenda for the final session day, singling out the lack of measures to targeting student loan debt in particular. Shilling noted the one bill offered by the governor to help provide some student loan relief, which would have created a tax deduction for student loan interest payments, was left off the agenda completely. “The Republicans are planning to adjourn the session without taking up any bills that address student loan debt, school funding, or infrastructure repairs,” she said.

The Senate will be on the floor starting at 11 this morning and it could be the early morning hours of Wednesday before they wrap up work for the year. The Assembly held its final session day last month.