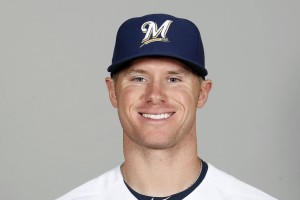 Despite struggling during spring training, Chase Anderson worked five scoreless innings and earned his first win as a Milwaukee Brewer, 6-4 over the Houston Astros at Miller Park on Friday night.

Anderson had allowed 26 earned runs in 14 2/3 innings, including five home runs during the spring.  He allowed just four hits, walked nobody and struck out five in his first regular season start for the Brewers on Friday night.

The Brewers gave Anderson plenty to work with, getting early home runs from Scooter Gennett and Chris Carter to give the Brewers a 3-0 lead.

Domingo Santana doubled home Keon Broxton in the second to put the Brewers up 4-0.

Ryan Braun clubbed a two-run homer in the eighth inning to close out the scoring for the Brewers.

Milwaukee took a 6-0 lead into the 9th but Houston’s Tyler White clubbed a three run homer off of newcomer Sam Freeman.  Preston Tucker then doubled home a run off of Jeremy Jeffress to make it 6-4.  But the game closed when Colby Rasmus was out at second on a double-play ground ball for the second out.  He was subsequently called for interference after over-sliding the bag at second under baseball’s new “Chase Utley Rule.”

The Brewers evened their record at 2-2.  Game two of the series is today.

AUDIO: Craig Counsell says the umpires got it right :12

AUDIO: Chase Anderson on his first win in Milwaukee :16