You are here: Home / Brewers / Brewers 1-hit by Garcia, fall to Cardinals (AUDIO) 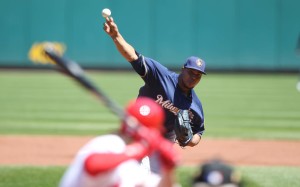 Jaime Garcia tossed a one-hitter as the St. Louis Cardinals cruised past the Milwaukee Brewers 7-0 at Busch Stadium in St. Louis on Thursday afternoon.

Domingo Santana singled in the sixth inning for the Brewers only hit off of Garcia, who struck out 13 Brewer batters.  It’s the most strikeouts for a Cardinals left-handed pitcher since 1970.

Milwaukee’s opening day starter Wily Peralta fell to 0-3, giving up five runs in five innings on seven hits with two walks.  The right-hander’s ERA is now 10.13, as he has given up 15 runs in 13 1/3 innings.

Jeremy Hazelbaker and Randal Grichuk homered for the Cardinals, who took two of three in the series.

The Brewers will open a three-game weekend series against the Pittsburgh Pirates at PNC Park in Pittsburgh tonight.

AUDIO: Wily Peralta on his struggles :18