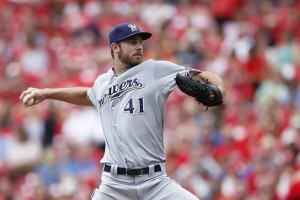 The Milwaukee Brewers loaded the bases in the first inning against Chicago ace Jake Arrieta, but couldn’t deliver the big blow as Arrieta struck out Chris Carter and Kirk Nieuwenhuis to wiggle out of the jam.  The Cubs went on to win 7-2, taking both games in the series.

Arrieta, who tossed his second no-hitter in his last start, was pitching on six days rest and clearly wasn’t sharp.  His streak of 52 2/3 scoreless innings at Wrigley Field ended in the fifth when Alex Presley’s double drove in Jonathan Villar.

The final score could have been much worse, but the Cubs went just 2 for 17 with runners in scoring position and stranded 14 runners in all.

Brewer pitchers walked 11 and the defense was horrid at times.

The Brewers return to Milwaukee to face the Miami Marlins at Miller Park tonight.

AUDIO: Taylor Jungmann on his confidence :13

AUDIO: Taylor Jungmann on what’s wrong with his game :18