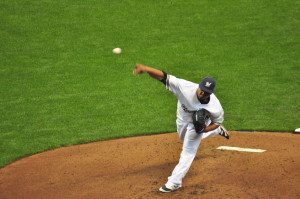 Wily Peralta was finally in line for his first win for the Milwaukee Brewers.  Peralta gave up a couple of early runs and his pitch count climbed early, forcing him to depart after five innings.  But Peralta settled down and departed with a 5-2 lead.

Unfortunately, Tyler Thornburg couldn’t hold that lead, coughing up a pair of lone home runs to Byung Ho Park and Eddie Rosario (2 run HR) to tie the game at five.

The Brewers didn’t quit though.  With one out in the ninth, rookie Yadiel Rivera doubled to center and took third when Byron Buxton bobbled the ball twice.  Scooter Gennett followed with a single to left, driving in Rivera and giving the Brewers a 6-5 win.

Thornburg gets the win and Jeremy Jeffress worked a 1-2-3 ninth inning for his fifth save.

The Brewers ended their three-game slide and split the two game series at Target Field.  The two teams open a short two-game series at Miller Park on Wednesday night.