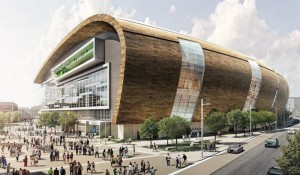 A rendering of the proposed Milwaukee arena.

The Milwaukee Bucks will stay in Wisconsin for at least the next three decades, under a deal with the public agency that will own the team’s new arena.

The Wisconsin Center District announced Wednesday that the owners of the NBA team have signed a lease that includes an agreement to keep the Bucks in Wisconsin for the next 30 years, with the team renting the facility at a starting rate of $1 million. District chair Scott Neitzel noted the deal includes legal protections that would require the team to pay at least $200 million to leave before the lease expires.

The $524 million arena will be built in downtown Milwaukee using a combination of private and public funding. The Bucks will cover any cost overruns on the arena, which is expected to take about two years to build. Bucks president Peter Fagan said they hope to break ground on June 18, although some additional city approvals are still needed.

The arena will likely also spark millions of dollars in additional development in the area, which Neitzel said makes it a “good deal for taxpayers, for the community, for the state, and for the Bucks.”