You are here: Home / News / Cruz wins Wisconsin Primary: “We’re winning because we are uniting the Republican Party” 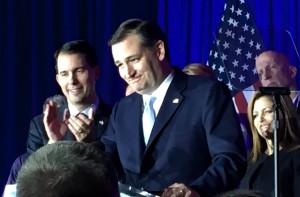 Cruz was declared the winner at about 8:30 p.m. CST, with 52 percent of the vote,  over current party frontrunner Donald Trump’s 31 percent.  The Texas Senator’s win here brings him closer to his goal of wresting the Republican nomination from Trump in an open national party convention.

Earlier in the week, a Marquette Law School Poll showed Cruz leading by double digits, so Trump doubled down his appearances in conservative areas of Wisconsin.

The Texas Senator’s win here brings him closer to his goal of wresting the Republican nomination from Trump — although he still trails the front runner in the delegate count.

Governor Walker campaigned with Cruz in week leading up to the vote — but has said that he’s not interested in a cabinet post in a Cruz administration. The governor also said any speculation about him as a vice-presidential candidate would be premature.

Walker spoke to the crowd in Milwaukee before Cruz’s victory speech, calling this win the turning point in the nomination.

“So, just how significant is tonight? Just today, our campaign has raised more than two million dollars,” Cruz said.

“We’re winning because we are uniting the Republican Party,” Cruz said, then turned his attention to Hillary and the general election.

Listen to the entire speech: