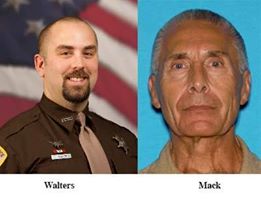 The Eau Claire County Sheriff’s Office has identified a deputy who shot a suspect to death just over a week ago. Sheriff Ron Cramer said Deputy Dustin Walters has been with the Sheriff’s office since July of 2012 and has worked in law enforcement for 11 years.

Walters shot 69-year-old David Mack of St. Paul to death on the morning of April 3rd.

The Sheriff’s Department said Walters had pulled Mack over for a traffic stop when he learned there were federal warrants for Mack’s arrest. When Walters tried to take Mack into custody, Mack came at Walters with what appeared to be an electronic device, such as a stun gun. Walters fired his weapon, hitting Mack, who was later declared dead at a hospital.

The Wisconsin Department of Justice – Division of Criminal investigation is reviewing the incident with the help of the Eau Claire Police Department.