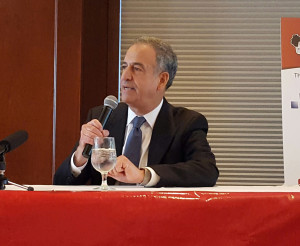 When it comes to who he voted for in Wisconsin’s April 5th presidential primary, Democratic U.S. Senate candidate Russ Feingold is keeping it to himself. “I didn’t even tell my wife,” Feingold told reporters Thursday, following an appearance at a wispolitics.com event in Madison.

Feingold, who is challenging Republican U.S. Senator Ron Johnson in November, said it does “no good” for him to talk about who he backed in the primary because he wants to help unify the party behind the eventual nominee, regardless of whether it’s former Secretary of State Hillary Clinton or Vermont Senator Bernie Sanders. “I have a lot of admiration for both candidates, I know them well, and I don’t see anything positive with talking about what happened with my secret ballot.”

Feingold said he support Johnson’s decision to take a similar position when it comes to who he voted for in the Republican primary, which was won in Wisconsin by Texas Senator Ted Cruz. “I respect his right to keep that secret himself.”

The former U.S. Senator did indicate though that he thinks Sanders will do the “right thing” when the time comes to step aside, if he fails to pull ahead of Clinton in the delegate count before she clinches the nomination. “There is no big hurry,” Feingold said. “People have to take time to get their feelings out about the differences.”

Feingold added that there are a lot of young people heavily invested in Sanders’ campaign and his presence in the race has been great. “He helped make Hillary Clinton a better candidate and what he did on his own raised issues that, frankly I’ve been raising for decades…that needed to be raised about the power of big money in politics and the dominance of Wall Street.”