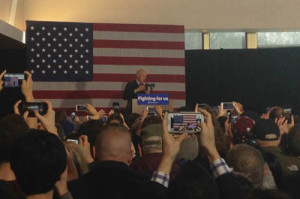 Former President Bill Clinton hit the campaign trail in Appleton Friday to urge voters to back his wife, former Secretary of State Hillary Clinton, in her quest for the Democratic presidential nomination.

Clinton told an overflow crowd of about 650 people on the Lawrence University campus that the choice between Democrats and Republicans in this election is clear, and people have to decide between a “populism of responsibility and positive change, or the populism of blame.”

Clinton touted his wife’s plan to let people save money on their student loans, noting that if every student could refinance their collect debt tomorrow, 25 million people would save an average of $2,000. He also discussed her support for providing equal pay for women, affordable childcare, and paid maternity leave – all things he said would make a huge difference in the U.S.