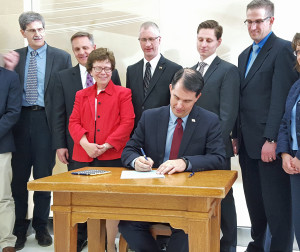 Governor Scott Walker signed a bill Friday that ends the restriction, banned the permitting of a new nuclear reactor in the state unless there is an established federal disposal site for waste and for proof a new reactor would not negatively impact ratepayers. The requirement were first put in place since 1983, and advocates of the change have argued that new and improved technology has largely eliminated the need for the state to continue following them.

Wisconsin currently only has one operating nuclear power plant – the Point Beach facility near Two Rivers. Walker said there has been no mention of anyone looking to build a new reactor anywhere in the state, although he noted there have been some national organizations that ending the restrictions could open the door to development down the road. “I think a large part of it is a lot of people were waiting to see if the state was actually going to follow through on it,” he said.

Critics of the change have raised concerns that safer forms of renewable energy exist, such as wind and solar power, and that nuclear is still not a completely safe form of energy. Walker on Friday said he’s not concerned about safety because of high regulatory standards at the state and federal, along with the lower risk of the types of natural disasters that have caused meltdowns in other parts of the world.

The measure passed out of the Legislature with bipartisan support. The governor signed the bill during a ceremony at the University of Wisconsin-Madison’s Energy Institute.