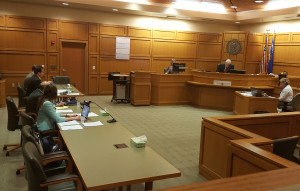 A Dane County judge has rejected a request from the state to stay his decision striking down Wisconsin’s right-to-work law.

Judge William Foust overturned the law earlier this month, after finding that the right-to-work provision amounts to an unconstitutional taking of union property. The law prevents employers from making union membership a condition of employment, but still requires unions to represent workers in negotiations who don’t pay fees or dues.

The law was passed last year and has been in effect since then. The state argued putting it on hold while they appeal the original ruling could create confusion for workers and employers. Attorneys representing union groups argued allowing it to remain in effect could cause long term damage to their organizations, as a result of the lost revenue.

In a statement, Attorney General Brad Schimel said “We are disappointed our motion for stay in the right-to-work case was denied in Dane County Circuit Court and plan to seek stay in the Court of Appeals, where we feel confident this law will be upheld.”

The Wisconsin AFL-CIO, which was among the union groups that filed the lawsuit, praised the decision. President Phil Neuenfeldt accused Governor Scott Walker and Schimel of “trying every legal maneuver in the book to advance their own partisan agenda and deny workers their right to a meaningful union.”