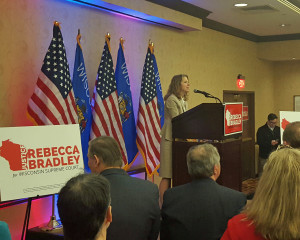 Speaking to supporters in Wauwatosa Tuesday night, Bradley offered a long list of thanks to those who helped support her campaign along the way. She also offered a conciliatory note to those who supported Kloppenburg in the race. “I am your justice too. Everything I said on the campaign trail I mean sincerely…I will always follow the law.”

Bradley was appointed to the court last October by Governor Scott Walker to serve out the remainder of Justice N. Patrick Crooks term following his death

Several other members of the state Supreme Court were on hand to support Bradley, including Justice David Prosser, who narrowly defeated Kloppenburg five years ago in a race that resulted in a statewide recount.

Bradley faced an often contentious race against Kloppenburg, following revelations earlier this spring that she had written a number of controversial columns in the early 1990s while she was a student at Marquette University. Bradley apologized for many of those writings, saying her worldview has changed since then and she regretted many of the things she said at the time.

Speaking to reporters Tuesday night, the justice said she learned a lot during the campaign, including that she is a “much stronger person than I thought at the outset of this race.”