You are here: Home / News / Kloppenburg concedes loss to Bradley 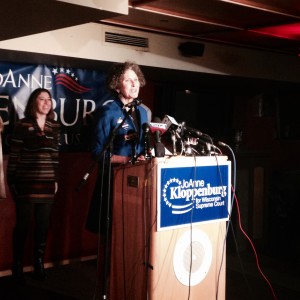 JoAnne Kloppenburg has lost a second race for the state’s highest court. With 88% of precincts reporting as of 11:30 p.m., Bradley had 53% and Kloppenburg had 47%. The Appeals Court judge, who lost a previous contest to Justice David Prosser in 2011, conceded the race for Wisconsin Supreme Court to Justice Rebecca Bradley.

“It is the outcome of a democratic process that gives the people of Wisconsin a voice in choosing their justices,” Kloppenberg said. Wisconsin is one of just 15 states that chooses state supreme court justices in what are officially “nonpartisan” elections. Bradley’s victory maintains conservative control of the Supreme Court by a 5-2 margin.

“We did all we set out to do, except for the coming out ahead part,” Kloppenburg told supporters who gathered with her in Madison Tuesday night. Kloppenburg will continue to serve on the Fourth District Appeals Court, to which she was elected to a six year term in 2012.