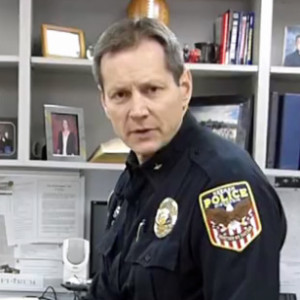 At the time of a fatal police shooting in his city last December, Neenah Police Chief Kevin Wilkinson said his officers ordered a man to drop his gun before opening fire on him. Now police dashcam video shows that warning was never issued. Still, Wilkinson says that from his perspective the officers “did exactly as they were trained.”

The USA Today Network-Wisconsin released the video on Thursday. It shows the death of 60-year-old hostage Michael Funk after he ran out of Eagle Nation Cycles during a standoff, documenting events that do not jibe with Wilkinson’s statements at the time. “It certainly appears from the video that there was no warning was given,” the police chief said. “There is no requirement that a warning be given, either by law or policy.”

“I said that he had not followed orders, and that was based on the witness statements,” Wilkinson told WHBY. “Because obviously I wasn’t there to see what happened and we weren’t at that point allowed to interview our own officers because they were under investigation by the department of criminal investigation, so we had to rely on what witnesses said. And it’s clear that I was also wrong about the medical treatment of Mr. Funk.”

Wilkinson said at the time that Funk was treated at the scene, but the dashcam video shows that officers left Funk lying in an alley after the shooting.

Wilkinson said he’s pleased the video has been released and has been calling for that since last December. “This is the most telling video, I think, that we have available. So I’m pleased that the public is finally able to see that.”

The state Department of Justice is still investigating the standoff at Eagle Nation.

WHBY contributed to this report