You are here: Home / Packers / NFL Schedule to be revealed tonight 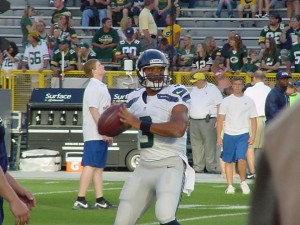 Russell Wilson will return to Lambeau Field this season.

The NFL said Wednesday that they will release the 2016 regular-season schedule at 7 p.m. tonight.  That means Packers fans can start making their plans for the upcoming season.

Based on last seasons finish, the Packers will play home games against Seattle, Indianapolis, Houston, Dallas and the New York Giants, along with divisional opponents Detroit, Chicago and Minnesota.

The Packers will face those same divisional opponents on the road, along with trips to Tennessee, Jacksonville, Washington, Atlanta and Philadelphia.

According to NFL.com, the Packers have the weakest schedule in the NFL based on opponents’ winning percentage last season.