You are here: Home / News / Packers open NFL season on the road 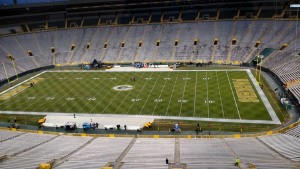 For the first time in 92 years, the Green Bay Packers will play their first two regular season games on the road.

The NFL schedule was released on Thursday night and it has the Packers opening their season with a noon game at Jacksonville on September 11.  They’ll head to the Twin Cities the following Sunday night to help the Minnesota Vikings christen the new U-S Bank Stadium which was built on the site of the old Metrodome.

That is one of five night games on the Packers schedule, plus eight noon games.

The Packers won’t play their first home game until September 25 (week three) against Detroit.  After an early bye in week-four, the Packers will play three consecutive home games in October.  They’ll have a stretch of three straight road games in November.

The Packers will also play a noon game on Christmas Eve against the Vikings at Lambeau Field.  Christmas Eve falls on a Saturday this year.

The Packers will be looking to improve their home record after finishing 5-3 at Lambeau Field last season.