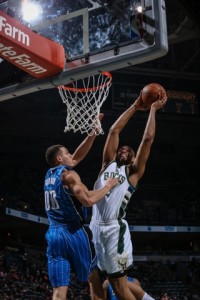 The Milwaukee Bucks coughed up another lead in the second half, but this time they figure out a way to pull out a victory.

The Bucks blew a 14-point lead, fell behind by six, then pulled out a 113-110 win over the Orlando Magic at the BMO Harris Bradley Center on Friday night.

Jabari Parker hit 12-of-14 shots from the field and led the Bucks with 26 points.  He also pulled down seven rebounds and dished out five assists.

It’s the second straight win for the Bucks, who ended Orlando’s three-game winning streak.  The Bucks will host the rival Chicago Bulls on Sunday night at the Bradley Center.