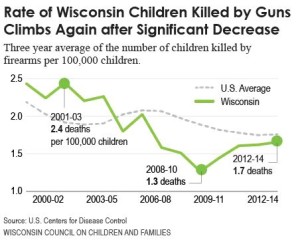 The number of children killed by guns in Wisconsin has risen in the past few years, prompting new calls for efforts to help limit access to firearms for some of the most vulnerable.

A report from the Wisconsin Council on Children and Families found a 31-percent increase in the rate of children killed by guns between 2008 and 2014. The group’s Tamarine Cornelius says that followed several years of declines in the state and nationally. “We’ve made some really great progress in reducing the number of children killed by guns, but that progress is being threatened,” she says.

The rate jumped from 1.3 deaths per 100,000 kids between 2008-10 to 1.7 by 2014. The numbers include any death involving someone under the age of 18 and a firearm, whether it be as the result of a suicide, accident, or criminal activity. Wisconsin’s rate is still below the national average, as it has been for about the past decade.

Cornelius notes the rate disproportionately affects children from African American communities, who are five times more likely as children of other races to be killed by a gun. She says they believe there are many factors that go into that, although major contributors are high poverty levels and less opportunities for children of color.

Cornelius says there are several steps that could be taken to help get Wisconsin’s rate trending downward again. Those include pushing technology that makes it harder for kids to use guns, which she compares to child-proof seals on pill bottles. She also suggests encouraging gun owners to make sure firearms are locked up properly at home, so it’s harder for kids to get ahold of them.

Other measures she suggests, such as expanding the types of gun purchases that would require a background check, have faced stiff opposition from pro-gun groups and Republican lawmakers.