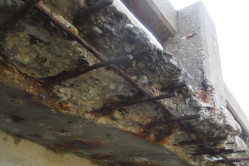 Exposed rebar on a bridge in Waukesha County. (Photo: TDA)

The head of a state transportation advocacy group says a recent report shows there’s a real need to change how Wisconsin funds highway and bridge projects.

The study by the American Road & Transportation Builders Association found about nine percent of the bridges in Wisconsin rate as structurally deficient, which means one or more elements of the structure are in poor or worse condition. The rating typically means work needs to be done, but the bridge is not necessarily unsafe to drive on, says Wisconsin Transportation Development Association president Jerry Derr.

Derr says the state does an excellent job of inspecting bridges and prioritizing where repair or replacement work is needed. However, he argues finding enough funding to keep up with projects is becoming increasingly difficult. “We’re heading down a path here where funding is not going to be available to maintain these bridges,” he warns.

Derr says the next state budget needs to get serious about the issue by exploring new revenue sources such as increasing the gas tax hike or vehicle registration fees. Such proposals have often faced resistance in the Legislature, which he admits could continue to be a problem. However, Derr thinks the public would be more supportive than lawmakers likely expect. “I think the motoring public understands that roads are deteriorating…they see it every day,” he says. “Obviously the issue elected officials have is that ‘tax’ word…they don’t like that.”

Derr believes most people would not notice a small increase, or would at least understand why it is needed. “If you go out and talk to your constituents, and lay the facts out there and express the need…they’ll work with you,” he argues.

State lawmakers wrestled with road funding last spring, which was at least partially responsible for a month-long delay in wrapping up work on the state budget. Republicans ultimately reduced the amount requested by Governor Scott Walker for the current biennium.