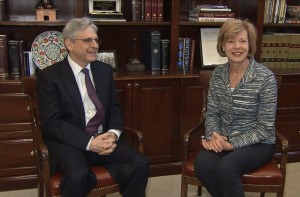 U.S. Senator Tammy Baldwin (D-WI) is renewing calls for the full chamber to schedule hearings and a vote on Judge Merrick Garland’s nomination to the U.S. Supreme Court.

Following a meeting with Garland Thursday in Washington, Baldwin called him “a very qualified nominee” who should be given full consideration. “We had a wide ranging discussion, and I leave my meeting more convinced than ever that my fellow Senators need to their jobs,” Baldwin said.

Majority Republicans in the Senate have made Garland’s nomination by President Barack Obama a political football during an election year, saying they do no not want to vote on the vacancy left by the death of former Justice Antonin Scalia until after the election. GOP leaders have argued voters should have a say this November on the future direction of the nation’s highest court.