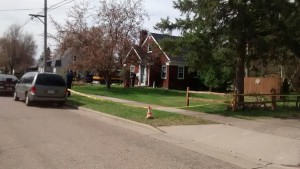 Wisconsin Rapids police are investigating the deaths of three people, in what is being called a murder-suicide.

Police say there are three people dead in the home, a 36-year-old man and a young boy and girl, ages three and four. Police told WSAU that they received a call from the man’s brother early Wednesday morning, who said he’d received an e-mail and that his brother was distraught.

Officers responding to a residence in the 400 block of 11th Street South discovered a strong smell of natural gas, and upon entering found all three dead of gunshot wounds. The state crime lab is on the scene assisting in the investigation.

Police Lieutenant Brian Krzykowski said investigators did not plan to release the names of the victims on Wednesday.