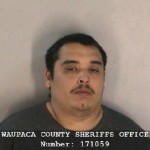 Two suspects have been arrested in connection with the death of a man whose body was discovered near Clintonville on Monday. Twenty-four-year-old Adam J. Ozuna and 16-year-old Zachary T. Hohn are both charged with first-degree intentional homicide and robbery with use of force. Homicide cases always begin in adult court, under Wisconsin law.

The victim has been identified as 25-year-old Matthew Pagel.

According to a criminal complaint, Ozuna and the juvenile allegedly picked Pagel up early Monday morning from a motel in Clintonville where he was living. Prosecutors say Pagel was looking to buy the drug Adderall and had been exchanging text messages with the pair.

Ozuna and Hohn offered to drive Pagel to get some Adderall, but instead beat him to death in the car and robbed him, ending up with $200 and Pagel’s jacket. Prosecutors say they used a car belonging to the mother of the younger suspect’s girlfriend, who also lives with Ozuna.

When the two returned, they were covered in blood and the girlfriend about the beating. Her mother eventually  found Pagel’s body in a ditch southeast of Clintonville and called 911 around 2:30 a.m.

Bond for both suspects was set at $500,000 cash. Prosecutors cited criminal histories for both defendants as a reason for the high bond.