You are here: Home / News / ‘United to Amend’ scores wins in 11 Wisconsin communities 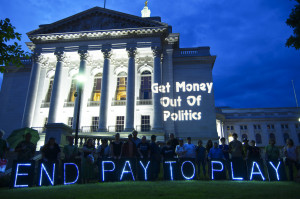 Residents in 11 Wisconsin communities voted Tuesday to amend the U.S. Constitution to make clear that corporations are not persons, and that money is not speech.

“Basically, that we need to restore our U.S. Constitution back the way our founders intended it, before money became speech and before corporations became people,” said Jim Crist, a board member and volunteer with the United to Amend effort in Wisconsin.

Tuesday’s votes brings the total number of Wisconsin communities that have called for an amendment to 72. Crist said that 2.5 million people, or 44% of Wisconsinites,  live in those jurisdictions.

“If we could get it on the ballot at the state level, that would be a huge next step,” he said.

Across the country, 16 state legislatures have voted for an amendment, as well as almost 700 towns, villages, cities and counties.