You are here: Home / News / Voters head to the polls in Wisconsin for spring elections 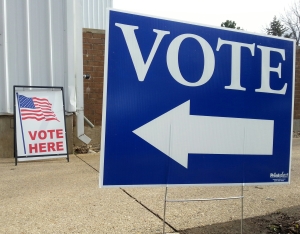 After nearly two weeks of presidential candidates visiting almost every corner of the state, Wisconsin voters heads to the polls today to make their voices heard in the state’s presidential preference primary. Many will also be weighing in on a state Supreme Court race, along with a number of local offices and referenda questions.

For the presidential field, Republicans are deciding who the nomination should go to between billionaire Donald Trump, Texas Senator Ted Cruz, and Ohio Governor John Kasich. For Democrats, it’s between former Secretary of State Hillary Clinton and Vermont Senator Bernie Sanders.

In the state Supreme Court race, Justice Rebecca Bradley is seeking a full ten year term in the seat she was appointed to last fall by Governor Scott Walker. She faces a challenger from Appeals Court Judge JoAnne Kloppenburg, who also ran for the court in 2011 and lost to Justice David Prosser following a statewide recount of the vote.

Polling places statewide will be open today from 7 a.m. until 8 p.m. It’s the first major election the state has seen with a voter ID requirement in place, with voters now having to show a qualifying government-issued photo identification card in order to obtain a ballot.

The state Government Accountability Board, which oversees elections in the state, is projecting voter turnout could be as high as 40 percent statewide. The last time Wisconsin saw turnout that high for a presidential primary was in 1980, when it hit 45 percent.