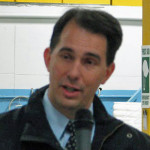 Governor Scott Walker spent Monday traveling around Wisconsin, talking about how much lower taxes are, since he took office in 2011.

One of his stops was at a business in Appleton. He said some of the $4.7 billion in tax relief helped companies expand, by lowering their tax liability. Walker said that’s leading to more people paying income taxes, through jobs.

Walker said an average family of four paid about $900 in income taxes over the past four years. He said property taxpayers also saved an average of about $100 over that period.

Walker’s talk at CMD Corporation was one of four stops he made Monday. He also visited Eau Claire, Wausau and La Crosse.