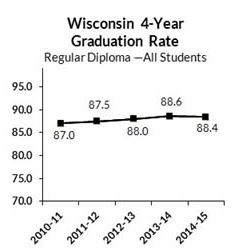 The state Department of Public Instruction said Thursday that the state had a high school graduation rate of 88.4 percent in 2015, down about two-tenths of a percent from the year before. Overall, 57,698 students earned their diploma. The national average rate during the same time period was 82.3 percent.

Among ethnic groups, White students graduated at the highest rate of 92.9 percent. Black and African-American students had the lowest rate at 64 percent, which is within a point or two of where they have been for much of the past five years.

In a statement, DPI Superintendent Tony Evers noted that the roughly 7,000 students who fell short of graduation last year still have a chance to earn their diploma. “There are resources to help you get back on track to earn a high school credential,” he said.