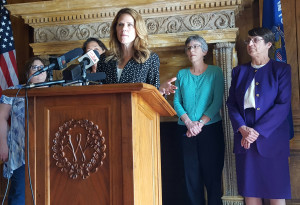 There were numerous reports of long waits at polling places across Wisconsin earlier this month, and some critics of Wisconsin’s Voter ID requirement argue the mandate was to blame for many of those. As a result, a coalition of state lawmakers are voting rights groups believe the state should be doing more to educate voters about the law ahead of the August primary and presidential election in November.

During a press conference at the Capitol Thursday, state Representative Chris Taylor (D-Madison) argued that “regardless of what you’re position is on Voter ID, we should all agree that we need a comprehensive voter education campaign on these new requirements.

The Madison Democrat wants the Legislature’s budget committee to approve funding for such a campaign, using at least some of about $267,000 in reserve funding that’s available. “This Legislature should be doing everything in our power to make it easier for people to vote, not harder. This voter education campaign really just must be funded.”

The state Government Accountability Board currently has some materials available for voter awareness efforts, such as public service announcements and a website with ID information. However, the agency has no additional funding to actually launch a media campaign. Taylor wants the agency’s board to authorize a request when it meets later this month, which would have to be approved by the Legislature’s budget committee.

As for whether the Joint Finance Committee would meet to consider the issue, the office of Republican co-chair John Nygren (R-Marinette) said he was unavailable for comment Thursday, while co-chair Alberta Darling (R-River Hills) did not respond to a message seeking comment.