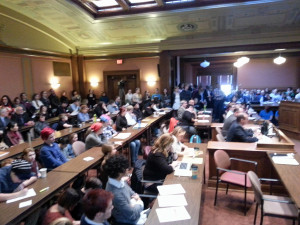 The public packs a hearing room at the Capitol last fall for a hearing on the ‘transgender bathroom’ bill. (Photo: WRN)

A Wisconsin lawmaker says he will revive a push next session to restrict the use of school bathrooms and changing facilities by transgender students – and could look to expand the focus of the legislation.

The bill from state Representative Jesse Kremer (R-Kewaskum) would have required students to use school facilities that match their biological sex, even if they identify with another gender. The proposal never made it out of a legislative committee, but the Kewaskum Republican says the national debate prompted by a much broader law in North Carolina shows something needs to be done. “I’d hope North Carolina does not back down,” he said. “I will be coming back with this next session and I hope we have people in the Legislature who finally realize this needs to be addressed.”

North Carolina drew national attention earlier this year when it passed a law that restricts public restroom use based on biological sex. The law has drawn widespread protests, with critics arguing it discriminates against members of the transgender community. It has also prompted several entertainers to cancel performances in the state and resulted in multiple businesses dropping plans to expand in North Carolina.

Despite the backlash, Kremer said he will “absolutely” consider expanding his original proposal to include all public facilities. “There is no such thing as a sexless society. We have to have some sort of boundaries. Because, if you let that go, where does it end?”

Kremer released a column Wednesday in which he claimed the current national uproar is an example of the left discriminating against women, who deserve to be protected in changing areas and bathrooms from men who may try to abuse the ability to access those spaces. “Progressive activists have finally blatantly, and unintentionally, unveiled their real war on women. In an attempt to appease a few individuals, these extremists have overplayed their hand and we, as citizens, must stand up to their intolerance and bigotry,” he argued.

Megin McDonell with Fair Wisconsin, which opposed the bill last session, said the possibility of the bill being reintroduced next year is not a surprise. She said the group “will be ready for whatever bad ideas Rep. Kremer and his allies…put forth.”