You are here: Home / News / Work resumes on bridge over St. Croix River at Stillwater 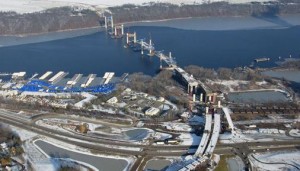 An early disappearance of river ice, no flooding, and light rainfall have allowed contractors to get a quick start on this year’s construction work on the new bridge over the St. Croix River connecting Stillwater, Minnesota and Houlton, Wisconsin.

Minnesota DOT bridge construction engineer Paul Kivisto says there will be work on all five piers of the bridge this year, although they probably will not be connecting the hundreds of concrete slabs making up its driving surface until next year. Still, he says “we’ll be looking much more like a bridge by the end of this year.”

On the Wisconsin side of the river, paving begins in May on a four-lane extension of State Highway 64 to a new on ramp.
While most of the work is taking away from motorists, Kivisto says boaters on the river are reminded to give the work zone a wide berth. “If you do come through here with excessive speed, it can cause wakes that could affect some of the equipment. There’s a lot of people that are on equipment that’s on a barge, and if the barge starts rocking…it can be a bit dangerous up there.”

Work on the bridge is scheduled for completion in the fall of 2017.