You are here: Home / Brewers / Anderson leads Brewers to win over Cubs (AUDIO) 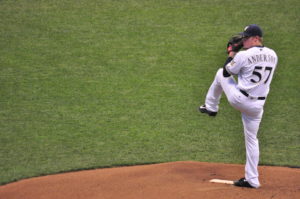 Milwaukee Brewers pitcher Chase Anderson took a no-hitter into the eighth inning and came a strike away from posting a complete-game shutout against the Major League leading Chicago Cubs.

Jason Heyward and Kris Bryant both clubbed solo homers in the ninth, but Jeremy Jeffress came on to retire Anthony Rizzo to give the Brewers a 4-2 win.  It’s the 11th save of the season for Jeffress.

Ben Zobrist doubled to lead off the 8th-inning, breaking up Anderson’s bid for a  no-hitter.

Anderson allowed three hits, two runs and a walk while striking out a season-high six.  He snapped a personal five-game losing streak.  The Cubs saw their 7-game Miller Park win streak come to an end.

The Brewers broke a scoreless tie in the fourth when Jonathan Lucroy homered to left, his third in as many games.

Ryan Braun also drove in a run with a single and Chris Carter clubbed a two-run double to close out the Brewers scoring.

Kyle Hendricks took the loss, dropping to 2-3 as the Cubs became the last Major League team to lose ten games this season.

AUDIO: Anderson on what was going through his mind after losing the no-hitter :14

AUDIO: Jeff Miller recaps the Brewers 4-2 win over the Cubs :35