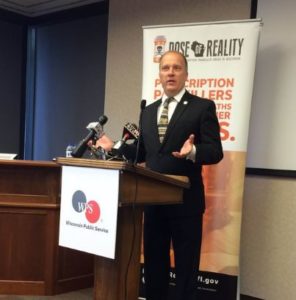 As part of an ongoing battle against prescription opiate abuse in Wisconsin, Attorney General Brad Schimel is urging employers to consider updating their drug-free workforce policies to include prescription drug abuse.

Schimel was in Green Bay on Tuesday to roll out what he called the next step of the “Dose of Reality” prevention campaign, an ongoing effort by the Department of Justice to reduce deaths tied to heroin and prescription drugs.

With some estimates showing about 163,000 people in Wisconsin are currently abusing opiates, the state has ramped up efforts in recent years to address the crisis. Schimel said earlier intervention could help to reduce the amount of resources that are needed to help someone kick an addiction.