You are here: Home / Badgers / Badgers back to Prime Time at Camp Randall 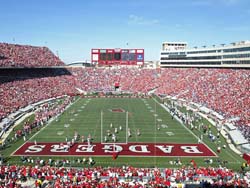