You are here: Home / Brewers / Brewers slug their way to victory (AUDIO) 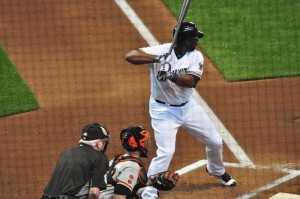 Chris Carter homered twice and Domingo Santana added his first career leadoff home run as the Milwaukee Brewers rolled to a 14-5 win over the Miami Marlins at Miller Park.

The 14 runs is the most scored by the Brewers since 2012.  They had 18 total hits for the first time since 2014.  They scored a season high seven runs in the third inning to avoid being swept in their three game series with the Marlins.

Neither starter recorded a strikeout, but Wily Peralta won his second straight outing as he became the first Brewer starter since 2009 to win while giving up 13 hits.  The Brewers won their first game since 1994 while not fanning an opposing hitter.

Carter came into the game in a mini-slump (0 for 12) before lifting his average to .278 with a three-hit day.  His two home runs give him seven for the season.  That’s tied for seventh in the National League.

The Brewers also went eight for 12 with runners in scoring position, snapping the Marlins seven-game winning streak.  The win for the Brewers ended their own four-game losing streak.

The Brewers are back home tonight, opening a three game series against the Los Angeles Angels of Anaheim.  Jimmy Nelson pitches for the Brewers.  The Angels will counter with righty Jered Weaver.

AUDIO: Craig Counsell on the game :21

AUDIO: Jeff Miller on the Brewers win over the Marlins :41