You are here: Home / Brewers / Brewers sweep Braves in Atlanta 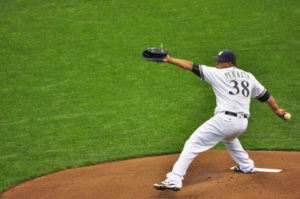 Wily Peralta drove in a pair of runs with a rbi single and pitched 5 1/3 innings to help the Milwaukee Brewers knock off the Atlanta Braves 6-2 at Turner Field.

The Brewers pulled out a three-game sweep of the Braves after sitting through a 1-hour, 17-minute rain delay in the 7th inning.

Peralta served up a two-run homer to Tyler Flowers in the first.  The Braves held that lead until the fourth, when Peralta’s 2-run single tied the score.

The Brewers moved in front for good when Ryan Braun homered.  Jonathan Villar also went deep to give the Brewers a 4-2 lead.

Hernan Perez clubbed a 2-run triple in the 9th to close out the scoring.

The win ended a string of 11 straight games that had been decided by two or fewer runs.

The Brewers return to Milwaukee to open a 3-game series against the Cincinnati Reds at Miller Park.

The Brewers put reliever Chris Capuano on the 15-day disabled list with left-elbow soreness prior to Thursday’s series finale against the Braves.

Capuano underwent Tommy John surgery twice previously.  Capuano said he was confident that the issue was inflammation related and not something structural.