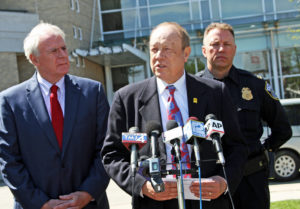 Attorney Michael Hupy announces the reward during a press conference in Milwaukee.

The FBI and a Milwaukee-based attorney are offering a combined reward fund of $35,000 for information about who is responsible for the death of a young girl who was shot while watching TV in her home earlier this month.

Police say nine-year-old Za’layia Jenkins died Monday, nearly two weeks after she was shot in the face by a stray bullet by two groups exchanging gunfire outside her home. Hundreds of people staged a march and vigil Tuesday, which would have been the girl’s tenth birthday. Police have not named any suspects in the case.

During a news conference, Attorney Michale Hupy announced he is offering $25,000 to the reward fund for the first person who provides information about the case that leads to the arrest and conviction of those responsible. “We cannot tolerate a society where small children are murdered, when gangs are engaged in a shootout, where bullets are sure to endanger innocent people in their homes and on the streets,” Hupy said.