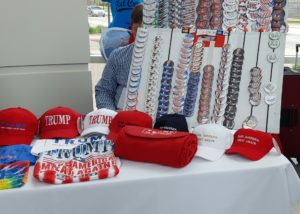 While most of the state’s top elected Republican officials avoided mentioning Donald Trump in their remarks at the party’s convention in Green Bay, some members of the Congressional delegation did not shy away from calling on attendees to back the presumptive nominee in November.

U.S. Rep. Jim Sensenbrenner (R-WI) was the first to break a seemingly unspoken ban on uttering Trump’s name during major convention speeches, declaring that he had supported Texas Senator Ted Cruz in the Wisconsin primary, but would be voting for Trump in November. “Donald Trump has won our nomination fair and square,” he said.

AUDIO: Rep. Sensenbrenner explains why delegates should back Trump (1:01)

The 5th District Republican urged delegates to look at what the stakes are in the next election, with the next president having the power to determine the direction of the U.S. Supreme Court. Sensenbrenner argued that those who choose to stay home in November would essentially hand the election to the Democratic nominee and Russ Feingold, who is challenging Sen. Ron Johnson (R-WI). He also warned that it could have an impact down the ticket. “We do not want to run the risk of (Governor) Scott Walker losing control of either house of the Legislature, because you know that the Democrats are going to frustrate everything that Scott Walker wants to do.”

U.S. Rep. Sean Duffy (R-WI) also urged delegates to back Trump, and even noted the almost taboo-like nature surrounding the mentioning of his name. Duffy pointed out that majority of voters in his district backed the billionaire in the state’s primary and told delegates “we’re going to make America great again with Donald Trump.”

AUDIO: Rep. Duffy on why Republicans should back Trump (:15)

Most other speakers at the convention directed most of their comments about the presidential race at the importance of beating potential Democratic presidential nominee Hillary Clinton in November. Sensenbrenner and Duffy were the only two to specifically name Trump though, while others just stressed the need to back the nominee.

Trump’s nomination seemed to linger in the background for many attendees at the convention, with most speeches focusing more on the need to re-elected Sen. Johnson. Of the many campaign buttons seen around the hall, House Speaker Paul Ryan (R-WI) and Congressional candidates were common sights, but few were publicly showing support for Trump.

Sporting one of Trump’s iconic “Make America Great Again” hats, Jeff Johns of Cedarburg said he’s talked to many people this weekend who either have mixed feelings about the nominee or have come forward to express their support as well. He argued that the sooner Republicans get together though, the better their chances are of defeating potential Clinton.