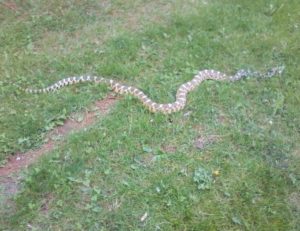 A photo of the bull snake taken by a resident of Dickeyville. (Photo: Grant County Sheriff’s Department)

The search for a large snake spotted in Grant County over the weekend has ended, after someone managed to take a picture of the elusive reptile and it was identified as a bull snake native to the region.

The Grant County Sheriff’s Department put out an alert Monday after someone reported seeing a snake crossing a road that was “as long as the width of both lanes of traffic.” The agency urged people to contact police right away if they spotted the snake and to make not attempt to catch the animal. Based on early descriptions, officials thought it could be a large python.

Grant County Sheriff Nate Dreckman said a deputy searching in Dickeyville Monday took a picture from a resident to “a person familiar with snakes,” who was able to confirm it was a very large bull snake. Based on comparing to landmarks in the photo, it’s estimated the snake is between 50″ and 70″ long.

Dreckman said there is no danger to the public. He added that anyone who comes across the snake should just leave it alone.