You are here: Home / Packers / Kickoff time set for Wisconsin vs. LSU at Lambeau Field 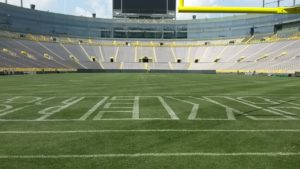 Wisconsin’s season opener against LSU in the Carmex Lambeau Field College Classic will kick off at 2:30 p.m. CT on September 3.  The game will be broadcast nationally on ABC.

It’s the first major college game in Lambeau Field’s storied history and serves as a rematch of Wisconsin’s 2014 season opener against LSU in Houston.  The Tigers won that matchup 28-24.

It’s the second straight season that the Badgers will open with a national broadcast on ABC.  The Badgers faced eventual national champion Alabama in the AdvoCare Classic in Arlington, Texas, to kick off the 2015 campaign.

Game times have now been set for four UW games this season: