You are here: Home / Packers / Lacy looked slimmer at OTA’s, but… 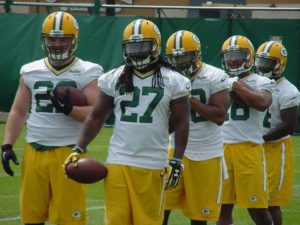 A slimmed down Eddie Lacy (27)during Tuesday’s OTA practice

When coach Mike McCarthy was asked about Lacy’s weight, he said Lacy, like other facets of his team still have some room for improvement.

Certainly, Lacy is in better shape than at any point last season.  Some believe his weight last season ballooned into the 250’s.

McCarthy called out Lacy after last season.  It would appear the coach is on board with the work Lacy has done so far, but wouldn’t mind seeing him do even more.  At his Tuesday presser, McCarthy said, “Eddie will be fine. I believe he’ll hit the target that we’re all looking for when the lights come on.”

For the Packers to be better this season, Lacy has to be better.  If he can keep the weight off, he’ll have a much better chance of doing that.

Sometimes young players come into the NFL and are motivated on their own to be in shape and stay in shape.  Others need a little guidance.  Lacy said that is where he fits in.